When I got home from work,  I caught the last few scenes of the film The Blindside which my sister was watching. 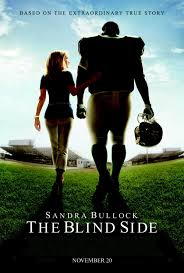 I read a story the other day about a boy from the projects. No daddy, in and out of foster care. He’d been killed in a gang fight at Hurt Village. In the last paragraph they talked about his superb athletic skills and how different his life might have been if he hadn’t fallen behind and dropped out of school. He was twenty-one years old the day he died. It was his birthday.

Before I knew it, my tears started to run down my cheeks, washing off my mascara and whatever makeup left on my cheeks. Yes, I’m a certified crybaby with movies. 🙂

I come from a very humble and challenging childhood. My family was poverty stricken and we were surviving under the generosity of my Lola (grandmother). I had nothing other than the desire to learn and nourish myself with all the knowledge I can soak from.

Then like in the film, somebody gave me a chance. An aunt enlisted me in a foster parenting program in the church called L’amie (means a friend), where kids with foster parents from Canada receive money to support their education. I remember it was something like P1,00 per month. In exchange, we have to be active in the church, write letters/cards to our respective foster parents and get good grades.

My English improved because we had to write letters in English every month with our Ates/Kuyas (more senior kids in the program) assisting us. My social skills developed (I was a very shy child) because of the church activities we did which also built my spiritual foundation.

Am now a graduate of the top university in the country, UP, and has an over a decade of IT experience for my career.

I still live in the same neighborhood though. And I see so many lives wasted as many of them don’t get to continue with their education. Many with several kids already that are just one year apart, whom I often spot on the street half naked, no slippers on, runny nose, soiled, tattered clothes, wandering and could use a good bath. The moms gamble thru the card game tong-its or play bingo with bets while their husbands smoke their life away in between drinking, spitting and cursing.

The past week, there were three funerals in our street. One’s funeral was adjacent to our house. He was a rumored junkie-entrepreneur (pusher) who got his head smashed by the goons he work for, causing his demise. They used to be the hot shots/rich family in our neighborhood when I was a kid. But their life spiraled down when their parents died.

The other one died of cancer who probably didn’t have regular check ups and the means for proper medication thus they didn’t detect her condition early. She was just 15 years old.

And the last one was a mother in her mid-twenties who expired while giving birth at home. It was her fifth child.

I could have easily been like any of them. But I did not. Thankfully. Because somebody dared give me a chance.

View all posts by me

One thought on “Making a Difference”